Exploring: The Church, Theology and Food

Earlier this week a Facebook acquaintance posted “I don’t know where you stand on this but marriage is between one man and one woman … as it was in Genesis 2 and 3.”  He followed up by saying …when I saw you were into Womanist Theology and Episcopal, I was not surprised.  What seminary did you attend?”  Like my seminary education had anything to do with the respect of human dignity. I went to Episcopal Divinity School for both my MDiv and my DMin.  My parents taught me to respect human dignity.

My response was, I support same-sex marriage because I respect the dignity and happiness of every person.  No exceptions ever.  Now the SCOTUS has spoken legalizing gay marriage nationwide.  That means even the state of my birth Michigan, must legalize same-sex marriage.

I connect through Facebook with a variety of people for whom I differ in opinion.  It is good to read post from others as long as they are not hateful or hate-filled.  I am well aware as an African-American woman who grew up in Detroit the wide variety of differences and opinions there are regarding same-sex marriage.  I am centered in the teaching that all Americans deserve justice.   I know what it is to feel apart from not a part of.  I know what it is to not get the job due to my color.  I know what it is to be called the “N’ word in my office of a parish that I was serving in.  Yes, right here in the liberal state of Massachusetts. But at the heart of it love is love.  No more hiding, no more not being let into hospital rooms because you are not “family”, no more explaining, NO MORE!

The closing paragraph from Justice Kennedy sums it all “…They ask for equal dignity in the eyes of the law.  The Constitution grants them that right…. It is so ordered.

Today’s ruling affirms that love is equal, love has dignity, love has respect.  Love is love!

I resigned from one of my jobs today. The icing on the cake that prompted the letter came when a clergy colleague sent me a piece on spiritual exhaustion. Part of the reading contained an excerpt from Psalm 31-9-16, You are indeed my rock and my fortress; for your name’s sake lead me and guide me.

I am reminded this week that Jesus was at a place of spiritual exhaustion. He needed to pray, to have time in solitude as well as having time to eat with those he loved. How hard it must have been to share that last meal, to give instruction and let both his male and female disciples know that the road to spreading the news was not going to be an easy.

Resignations are always fraught with mixed emotions. One day I just woke up exhausted. I could do no more. The broader issues and problems of the organization and administration had worn me down. I needed to stop now and sit at Jesus’ table and be feed. My friend Dave says “you may not be the person who is able to help someone, but you may have planted a seed that makes the person who comes after you water the seed to grow.”

God’s power reaches us when we need a shoulder to lean on, a hand to hold, and a meal to share. 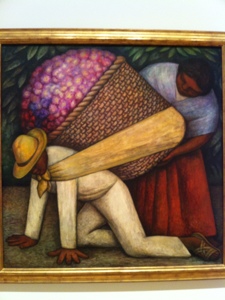